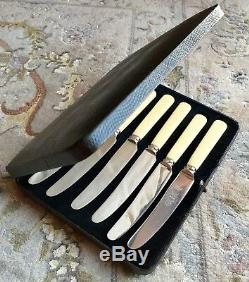 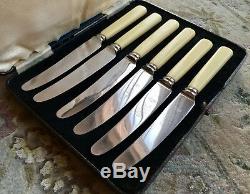 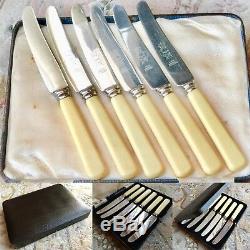 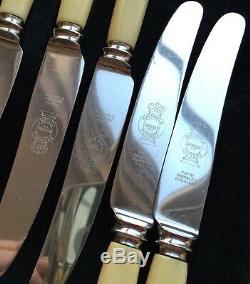 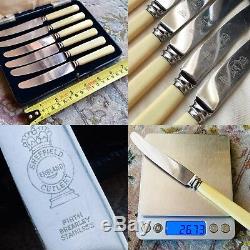 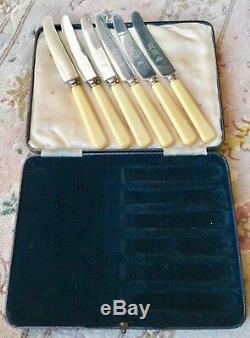 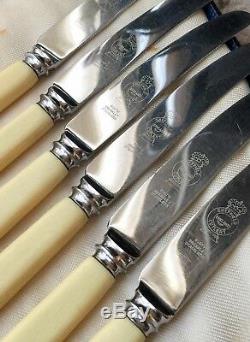 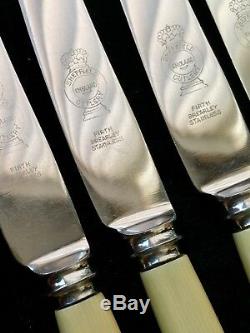 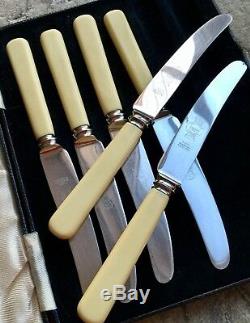 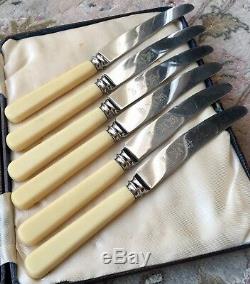 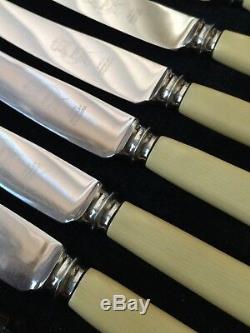 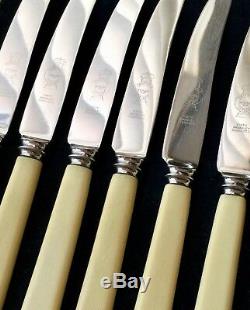 Very Rare Antique Museum Quality Firth Brearley Stainless Steel Butter Knife Set With Bovine Bone Handles In Silk Lined Presentation Box. Rare opportunity to acquire one of the worlds first stainless steel cutlery sets ever produced (in the Art Nouveau period) by the worlds first inventor of stainless steel Harry Brearley of Firth Brearley Steel in the UK. A marvellous antique stainless steel set manufactured by the man who discovered stainless steel. Please browse all 12 set of photographs for size, weight and condition as they are self explanatory. The set is in good order the only minor item to report are some minor age marks on the silk lining inside the box. Other than that in remarkable condition for its age. Harry Brearley (18 February 1871 14 July 1948) was an English metallurgist, usually credited with the invention of "rustless steel" (later to be called "stainless steel" in the anglophone world). Brearley was born on 18 February 1871 in Sheffield, England, the son of John Brearley, a steelworker, and his wife, Jane Brearley née Senior. He left Woodside school at the age of twelve to enter his first employment as a labourer in his father's steelworks, later getting the post of general assistant in the company's chemical laboratory.

He married Helen Theresa Crank (18741955) on 23 October 1895. For several years, in addition to his laboratory work, he studied at home and later in formal evening classes, to specialize in steel production techniques and associated chemical analysis methods.

By his early thirties, Brearley had earned a reputation as an experienced professional and for being very astute in the resolution of practical, industrial, metallurgical problems. It was in 1908, when two of Sheffield's principal steelmaking companies innovatively agreed to jointly finance a common research laboratory (Brown Firth Laboratories) that Harry Brearley was asked to lead the project. After leaving Brown Firth, Brearley joined Brown Bayley's Steel Works, also in Sheffield; he became a director of the firm in 1925. In 1941 Brearley created a charitable trust The Freshgate Trust Foundation, a grantmaking charity operating in Sheffield and South Yorkshire.

His aim was to provide a "Fresh Gate" or new opportunity to people like him born into modest circumstances so that they may experience the finer things in life such as travel, education, the arts and music. The foundation is still operating as a registered charity awarding grants for charitable purposes in South Yorkshire. Brearley died on 14 July 1948, at Torquay, a coastal resort town in Devon, south west England. He was cremated at Efford Crematorium, Efford, near Plymouth on 16 July 1948[1] and his ashes were scattered in the Efford Crematorium Garden of Remembrance. In 2013, in the Sheffield University Varsity Brewing Challenge, Sheffield University named their beer brewed by Thornbridge Brearleys, to commemorate 100 years since Harry Brearley invented stainless steel.

In the troubled years immediately before World War I, arms manufacturing increased significantly in the UK, but practical problems were encountered due to erosion (excessive wear) of the internal surfaces of gun barrels. Brearley began to research new steels which could better resist the erosion caused by high temperatures (rather than corrosion, as is often mentioned in this regard). He began to examine the addition of chromium to steel, which was known to raise the materials melting point, as compared to the standard carbon steels. The research concentrated on quantifying the effects of varying the levels of carbon (C, at concentrations around 0.2 weight %) and chromium (Cr, in the range of 6 to 15 weight %). Harry Brearley discovered stainless steel in the UK on 13th August 1913 and subsequently announced the non rusting stainless steel discovery in the New York Times in 1915. In order to undertake metallography to study the microstructure of the experimental alloys (the main factor responsible for a steel's mechanical properties) it was necessary to polish and etch the metallic samples produced. For a carbon steel, a dilute solution of nitric acid in alcohol is sufficient to produce the required etching, but Brearley found that the new chromium steels were very resistant to chemical attack. It was probably Harry Brearleys upbringing in Sheffield, a city famous for the manufacture of cutlery since the 16th century, which led him to appreciate the potential of these new steels for applications not only in high-temperature service, as originally envisioned, but also in the mass-production of food-related applications such as cutlery, saucepans and processing equipment etc.

Up to that time carbon-steel knives were prone to unhygienic rusting if they were not frequently polished and only expensive sterling silver or EPNS cutlery was generally available to avoid such problems. With this in mind Brearley extended his examinations to include tests with food acids such as vinegar and lemon juice, with very promising results. Brearley initially called the new alloy "rustless steel"; the more euphonic "stainless steel" was suggested by Ernest Stuart of R.

Virtually all research projects into the further development of stainless steels were interrupted by the 191418 War, but efforts were renewed in the 1920s. Brearley had left the Brown Firth Laboratories in 1915, following disagreements regarding patent rights, but the research continued under the direction of his successor, Dr. It is Hatfield who is credited with the development, in 1924, of a stainless steel which even today is probably the widest-used alloy of this type, the so-called "18/8", which in addition to chromium, includes nickel (Ni) in its composition. Further superb historical information at.

The Life of Harry Brearley(18711948) ornaverum. The item "Antique Firth Brearley Stainless Steel Butter Knife Set With Bovine Bone Handles" is in sale since Thursday, August 30, 2018. This item is in the category "Collectables\Kitchenalia\Cutlery".

The seller is "santoor-uk" and is located in Salford, Greater Manchester. This item can be shipped worldwide.